Hello fellow TAB fans. I'm absolutely infatuated with the Avett Brothers ever since I first was introduced to them at a bar in Atlanta the summer of 2004. I was immediately hooked and have been ever since. My wife would say I have a a severe man crush on the band and admittedly she is spot on. I love everything about the band and my crush has spread to my immediate family as well, three of my boys play cello, bass and guitar and they too enjoy attending all the concerts I take them to. There really is nothing more satisfying then seeing them and hearing them play TAB songs as I walk around the house or if were in the car driving. But let me digress. I'm posting here to do some research. I own many, many TAB items, mostly signed or autographed but really it doesn't matter, if its TAB related I want it, lol. One of my most cherished items is a signed TAB skateboard with a banjo pictured on it. It is the same skateboard in the attached photo which Scott and Seth are holding, only I'm not sure it is the same exact skateboard, but remain hopeful

Anyway, I purchased this several years ago, I think in 2013 or 2014? It came with a COA, and I had it framed and mounted so I could show it off to my family and friends or just stare endlessly at it from time to time, haha, which I do often. I don't know much about it really. I think it was made by Sector 9? Weird I have never seen or found another one like it so I am curious how many were made and for that matter signed by the brothers? I did purchase another TAB deck from the Magpie album, which I gave to my son, however it is not signed. Does anyone know if they made anymore decks for other albums? Does anyone have a deck they want to sell? If you have any of these answers, please respond to this post. 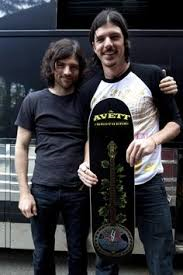 That is an awesome deck, Glen. Is the picture of the brothers with it yours or did it come with the deck?
Glen Kruse
Northville, MI
Top

No, I'm not certain the deck in the picture is mine. I purchased the deck via third party so can;t be sure. I like to think it is but that's probably wishful thinking. lol
Top

Thank you for the board questions. They help us to understand the main problem of the article. Besides, your threads are always very cognitive and special.
http://www.check-my-essay.com/
Top

I purchased one of these decks at the 9/28/12 Northerly Island Show in Chicago. They were available at the merch table, unsigned, wrapped in shrinkwrap. I think they were $40.
Top

I would love to buy one of those decks off of either one of you. I don't care if it's signed or not. If interested. Email me jtp12379@yahoo.com
Top
Post Reply
6 posts • Page 1 of 1

Users browsing this forum: No registered users and 3 guests